About the Kiwamu Patch 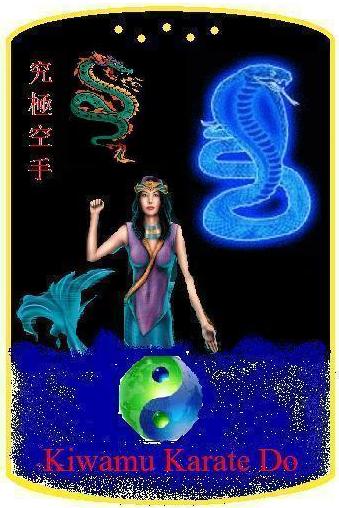 The Blue Cobra: This represents the Grand Master of Kiwamu Paul DeVoe cause of his nickname Kobra.

The 5 Stars: From left to right Chun Kuk Do, Ninjutsu, Isshin-Ryu, Hapkido and Sanchin-Ryu all together to make Kiwamu. They represent the 5 instructors that taught Grand Master DeVoe. They represent the guiding light that guides you to the top, they also represent confidence, respect, courage, honor, and power.

The Dragon: The Dragon represents the martial artist in asian mythology the dragon is born under the water and rises as it matures just like the karate-ka rises to black belt as they grow in the martial arts.

The Dragons Fire: This represents the spirit of the martial artist.

The Yin & Yang: The colors represent the earth the blue represents the water and the green represents the land to show that a martial artist should be one with the world and its environment. Each half and each circle represent a word and the words are mind body spirit heart and that they are one with yourself.

The Woman: The woman is half woman half serpent The woman represents that all martial artists should be caring and gentle like a woman but the serpent part means that we should have the ability to strike with speed and power when needed.

Her Hands: The open hand shows peace, while the closed hand shows the ability to fight if needed.

The Water: The wavy waters mean the troubles that lay ahead that all martial artists need to overcome.

The Black Sky: The Sky represents the unknown that all martial artist need to be prepared for in case a situation should arise.

The Kanji: The Calligraphy or Writing on the patch says Kiwamu Karate it don’t have the Do because the do which means way is the whole patch and shows how a martial artist should live there lives

The Name: The Name in the water is Kiwamu Karate Do which translates into Ultimate Empty Hand Way the Reason that the style’s name is in the water is because it represents that the practitioners of Kiwamu fight with relaxation and fluidity and move smoothly like the water.

The Gold Border: The Border represents that karate is golden and precious and not to be displayed for everyone to see unless absolutely needed.